The latest article on Racket Racket from Douglas MacIntyre of the Creeping Bent organisation is dedicated to the memory of Douglas’s father who passed away recently. Rest In Peace. 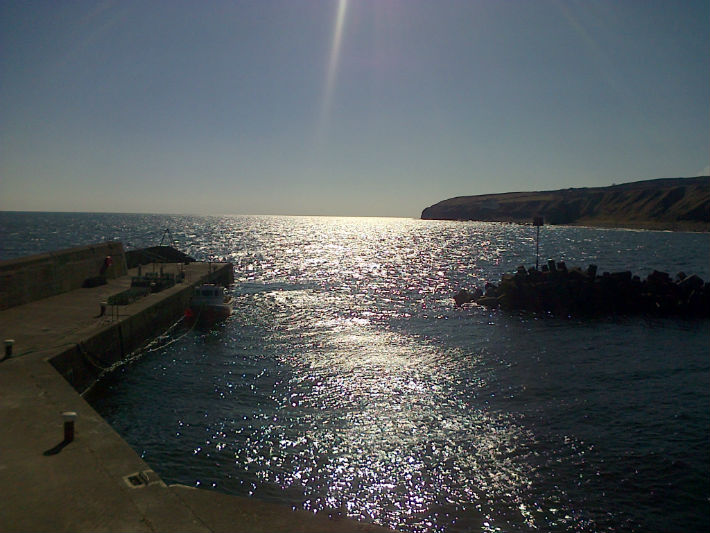 Caithness is the maligned North East part of the British mainland. Most initial reactions despair of its flat, harsh, dour landscape with only one mountain, Morven (which I climbed in the April snow on my birthday) but on greater inspection there is a raw soulful quality to Caithness. There is no doubt that the West Highlands of Scotland are very dramatic and romantic (as noted by Boswell and Johnson among others) and it is impossible not to be moved by the inspiring drive up the West coast past Loch Maree on to Ullapool onward to Lochinver and its Sugar Loaf Mountain. However, after holidaying for the last three years in Caithness, I’m now in thrall to its flat barren mix of agricultural lunarscape and rugged sheer cliffs. The fields tend not to be separated by fencing but by slabs of Caithness flagstone, which adds to the grey allure (not a problem personally, Subway Sect grey works for me).

For us, Caithness’ hidden gem is a feat of man-made determination hewn from the cliffs that seem to determine the character of the people of the region, the Whaligoe Steps.

Perhaps a key problem in the perception of Caithness is John O’Groats – the end of the line – which is undoubtedly grim. However, just walk east from the pier where the ferry departs to Orkney along the coastline for a few miles past a beach strewn with groatie buckies (northern cowries) and you arrive at Sannick Bay, from which it’s possible to walk up the single road to the lighthouse. It’s a short walk from there along to the Stacks of Duncansby and the quite spectacular cliffs. Along the coastline cliffs there are lots of breeding oakie (gullimots), borrie (razorbills), molly moke (fulmars), kitty facky (kittiwakes), on the higher ground tammie norrie (puffins) nest in burrows whilst the lower cliffs are home to nesting scarfies (shags). 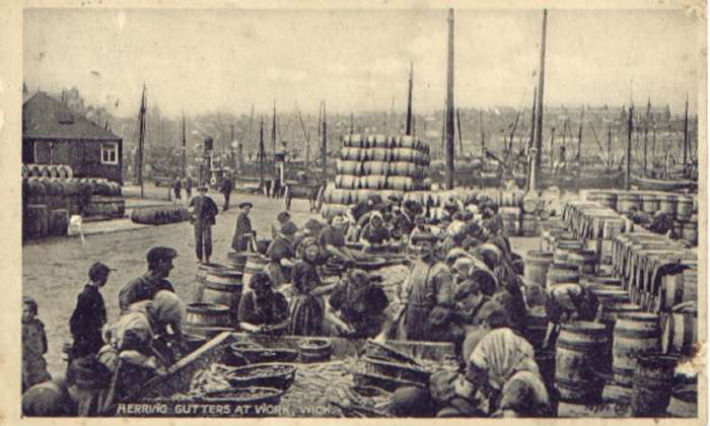 On our first Caithness holiday we stayed in a cottage in Freswick, three miles due south of John O’Groats and last year we stayed in Papigoe. This time we stayed in Wick with my sister-in-law, who very graciously put us up (and put up with us). Wick is a reasonably big town and feels gigantic compared to most of the other villages and crofts dotted around Caithness. Wick is steeped in fishing industry history and was at one point the busiest herring harbour port in Britain, exporting mainly to Europe and the Baltics. This was at the height of the herring industry – in 1860 there were 1,100 boats working the herring summer season. 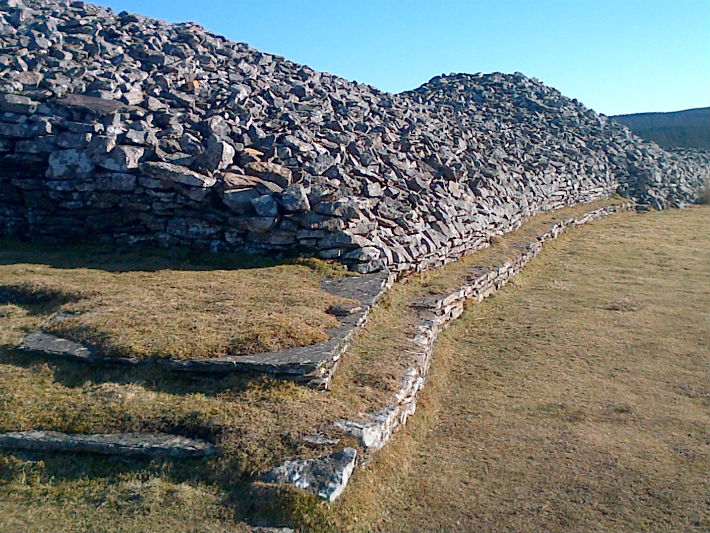 Caithness is an area of significant and distinct archaeological sites. We visited the Yarrow Trail and the burial cairns at Camster – large stone mounds constructed by hand which are entered by crawling through a narrow channel through which you reach a dome chamber. We were fortunate that the weather was fantastic, which rendered the extreme flat vistas and expansive horizon skies in international Klein blue. The extremely bright sun also resulted in the magnificent beaches and dunes that line the top coastline of Scotland looking at their most tranquil. Over several days we stopped at the following beaches: Reiss, Keiss, Castletown, Dunnet Bay (before driving to Dunnet Head, the most northernly point of Britain), Melvich, Strathy Point, going as far as Bettyhill (all rated by the surfing cognoscenti).

The collective beauty of these beaches and coastline is staggering, with the surreal juxtaposition of Dounreay Nuclear Plant acting as a counterpoint to the idyll. Our favourite was Peedie Sands, a beautiful hidden treasure that required a fifteen minute walk over the cliff head from Dwarwick Pier. It really was spectacular as the sun dappled the sea from the headland over to Orkney whilst the fulmars rode the thermals to and fro their cliff nesting spots. 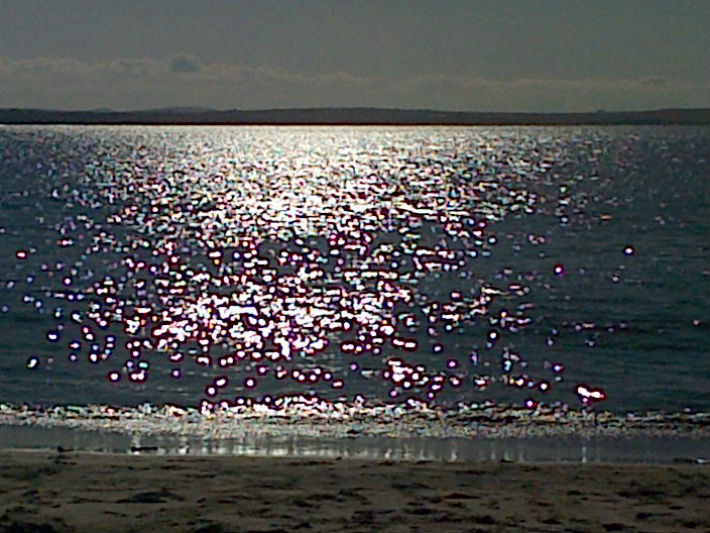 The South East coastline from Caithness down to the next region, Sutherland, is also quite spectacular. There are lots of natural geos around which small fishing villages arose during the herring boom, one of our favourites is Dunbeath. We parked at the harbour and walked up the Dunbeath Water, my fish-eye was scoping pools and runs for any trout action (didn’t see anything). After a picnic, we walked downstream to where the river meets the sea at the harbour. The light was remarkable, it felt like the ghosts of herrings past were shimmering silver mercury over the sea and beyond. We walked along the shore until we came to the cave, which featured an intriguing sandstone rock formation. Fulmars were nesting not far above our heads, and curiously a raven had built its nest of large sticks in the midst of the fulmars, co-existing in harmony. Dunbeath is the birthplace of Neil Gunn, probably best known for his novel about the herring industry, Silver Darlings.

Shelton ruminates about the chemo-receptors of lobsters, the protective antibodies contained within the slime of hagfish, the history and workings of 8-bore guns and wildfowling, and the edibility of cormorants…

I brought David Byne’s How Music Works tome as my intended holiday reading. However, I noticed a book my sister in law was reading that grabbed my fancy, and duly swiped it. I had never heard of Richard Shelton or his book The Longshoreman, but on scoping a couple of random pages, immediately felt the urge to read the book from the beginning. It is a fascinating read that resonated with my own rural upbringing, a world where fishing and shooting were the norm for working men. Shelton ruminates about the chemo-receptors of lobsters, the protective antibodies contained within the slime of hagfish, the history and workings of 8-bore guns and wildfowling, and the edibility of cormorants. As if that’s not enough, he discusses governmental agriculture and fisheries policy over the years, along with in depth descriptions of boats and the minutiae of tidal drift and oil dispersal (as applied to the Torrey Canyon oil spill disaster of 1967). As you can see, all the ingredients for a riveting read. 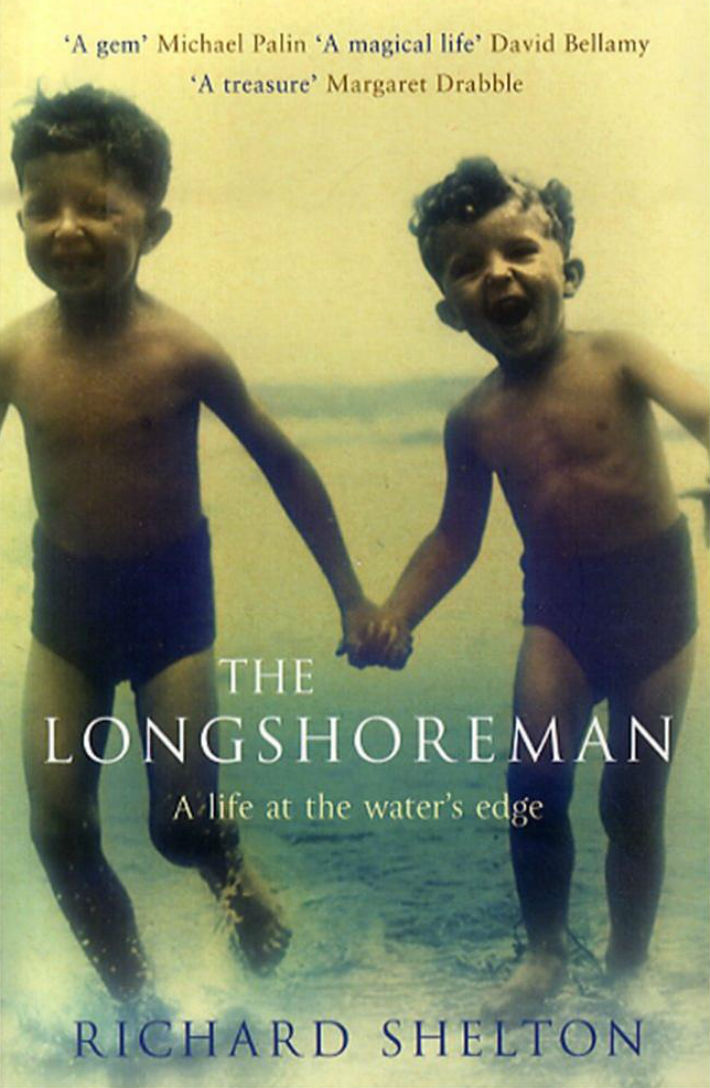 For us, Caithness’ hidden gem is a feat of man-made determination hewn from the cliffs that seem to determine the character of the people of the region, the Whaligoe Steps. 365 flagstone steps were cut into the steep cliff down to the sea to allow fisherwomen to carry the gutted fish (mostly herring) in baskets from the small harbour station at the bottom to the top of the cliff. The fish were then taken, by foot, eight miles away to Wick to be sold. It’s quite incredible to think that by 1826 there were twenty four boats working Whaligoe, a number that declined as rapidly as the demand for herring. The name Whaligoe is derived from ‘whale’ and ‘geo’ (meaning inlet). When whales that died at sea drifted into the geo, they would be strapped up and winched from the bottom to the top of the cliff (their blubber and meat would be used by the locals).

Although I had read about them as a boy, the first time I saw the Whaligoe Steps on television was on a 2004 documentary about Edwyn Collins. In another more recent documentary (Home Again) made after Edwyn’s stroke in 2005, he revisited Whaligoe. In the footage of Edwyn and Grace carefully walking down the steps, you get a sense of just how steep they are (definitely not for anyone who suffers from vertigo).

I fell for the charms of Orange Juice and Postcard in a big way. It really is affirmation of the human spirit to see Edwyn still making vital records and playing live.

I always felt a certain affinity with Edwyn, we seemed to have the same records – Chic, Subway Sect, Velvet Underground, Bowie (I was at the same Bowie 1978 gig in the Glasgow Apollo when Edwyn met Alan Horne). I even had the same AA Book of British Birds from which Edwyn learned to draw birds. I was aware of Edwyn and Falling & Laughing before Postcard went public, as it was recorded in my home town of Strathaven and the owner of Emblem Studios had shown me a poster and made me aware of a new group he thought I might like called Orange Juice. I bought the 7” (with Felicity flexi-disc) on release, and like every other Godard-punk, I fell for the charms of Orange Juice and Postcard in a big way. It really is affirmation of the human spirit to see Edwyn still making vital records and playing live. On Thursday 18th April I drove past the ABC in Glasgow on my way to the Jazzateers (who Edwyn produced for Postcard) first rehearsal for thirty years. Edwyn was playing the ABC, and although I was disappointed to be unable to attend, it was most heartening to see people both young and old, male and female, heading along to his concert.

I had the great pleasure of playing guitar for Edwyn at the Glasgow Fruitmarket in Jan 2009 as part of a sold out Celtic Connections show. The Orange Juice Dub Arkestra was devised by all-round pop magus Sushil K. Dade aka Future Pilot AKA. The concept was to present Orange Juice songs in a live concert as imagined with Dennis Bovell on the live mix, featuring guest vocalists. Sushil had organised a live group to back vocalists like Duglas T. Stewart, Karine Polwart, Norman Blake covering OJ songs such as Bridge, A Place in My Heart, To Put it in a Nutshell, with the opening song being James Kirk’s b-side of Falling & Laughing, Moscow (which featured Sushil’s and my (then) 9 and 8 year olds doing the “Moscow” chant). The audience had no idea that Edwyn was present, so when he walked out to sing What Presence followed by Rip It Up the crowd raised the roof. A truly memorable evening.

This recent video by Edwyn for his Dilemma single was filmed in Helmsdale, a pretty harbour village situated where Caithness becomes Sutherland.

If you enjoyed reading that then chances are you’ll like Douglas’s Run Run Run series from last year. And also worth a gander Don’t Let Your Son Grow Up To Be A Cowboy, a great piece written by Douglas about Glasgow post-punkers, the Jazzateers ahead of their performance back in June 2013 at the Glasgow Jazz Fest. More from him on the site later this year.