All absorbing video tape feature on the Upper West Side from 1977. It focuses on the people who lived there and their varied perspectives on the area around Needle Park, just two blocks down from the Dakota Building. Some salient words on the city – and that area in particular – from DJ Dribbler to accompany things. An essential watch (and read) for anyone with even a passing interest in the modern history of the Big Apple.

New York is a city where the hustle never stops.

The people in New York are incredibly self motivated and mostly concentrate on taking care of number one.

They centre things around themselves, be it conversation, thoughts or day to day goings on. Ultimately, it’s all about them.

Quentin Crisp summed it up perfectly by pointing out that he could jump up on a diner table in the Lower East Side of a morning and announce – “I’m doing a play, it starts tonight at 8pm…”

Far from causing shock at the outburst or judging his actions in any way, typical New Yorkers, he said, would immediately be interested and react. In New York every action has a reaction.

“Tell me, do you need any cellists for this play? I’m a cellist…”

“My boy’s an actor, let me call him, see if he wants a part of this play.”

Crisp (or Crispy as he was known on Ludlow Street and by the homeless on his block) would then contrast the New Yorkers’ reaction with what he could typically expect if he were to do the same thing and jump atop the table in a London greasy spoon café.

Crisp said heads would hide in hands, people’s faces aghast… Shaking their heads sorrowfully, diverting eye contact and saying to each other,

“How appallingly embarrassing for that poor man. If I ever do such a thing please shoot me…”

Crisp was a flamboyant dandy and homosexual, he wore lipstick and effeminate clothing. It’s a great analogy he used and it’s reinforced by his talking of the people and their reactions to him to highlight the differences between the two cities.

The video featured here focuses on the Upper West Side of Manhattan around 72nd Street and Broadway. The people interviewed illustrate the broad cross section of society that lived around there at the time. 72nd and Broadway is also Sherman Square, aka Needle Park, made famous by Al Pacino in the movie Panic In Needle Park which focused on the rife drug use around Sherman Square at the end of the 60s into the 70s.

Crisp was a flamboyant dandy and homosexual, he wore lipstick and effeminate clothing. It’s a great analogy he used and it’s reinforced by his talking of the people and their reactions to him to highlight the differences between the two cities…

The guys in the kiosk in the film say they have to watch all the time because people are trying to “rob them, mug them or kill them…” When asked if someone had tried to kill them before they say “Plenty times…”

The Dakota Building is on the corner of 72nd and Central Park West, just two blocks from Needle Park. One of the most famous, luxurious buildings in Manhattan. Residents in the video mention how only blocks away from the Dakota is the “marijuana area” of the neighbourhood.

It’s highly likely that Lennon’s ‘dark phase’ in the 70s (when he was drinking lots and getting messed up) was spent largely around that way. There’s some footage of local kids from a play park where Lennon had been filmed previously. He’s walking with Yoko with, the young ones shouting at him jokingly – “Hey John, When The Beatles getting back together?”

Him and Yoko would walk around the neighbourhood because people left them alone up there. They’d be out shopping or for whatever reasons. It doesn’t take a genius to figure out what they were most likely doing.

Another NYC friend told me he was drinking in some dive bar up there back in the day and Lennon came in and ordered a strawberry daiquiri, his favourite tipple at the time. Lennon was renowned for not being able to handle his drink, got aggressive when refused more alcohol at the bar and said to the barmaid “Do you know who I am?” to which the Upper West Side lady barmaid replied “Yeah. You’re an asshole with a daiquiri.” 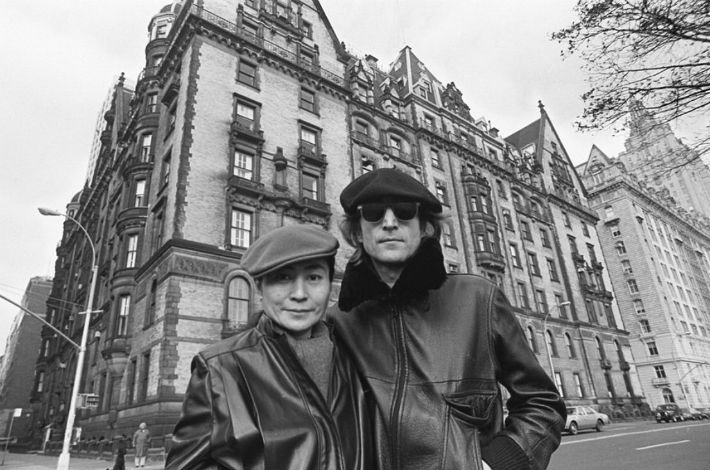 An older gentleman in the footage says he likes the geography of the area, how it’s close to the theatres and downtown but he doesn’t mention Central Park which is merely 3 blocks away. This was a time when tourists were told specifically not to go to Central Park. There were murders and rapes every week up there at the time. Gangs patrolled neighbourhoods and areas of the park were no different.

Anyone living on the Upper West Side today would state the close proximity of the park as most likely their favourite part of living there. Central Park being such an unavoidable asset to the upper West and east Sides, yet that old man never even mentioned it. Central Park was an incredibly dangerous place to be in the 1970s and 72nd Street runs right through it.

Property prices have rocketed and all the pushers have moved uptown in the years since the clean up. They had to clean it up eventually. My friend Sam’s family home where he grew up in the 60s is up there on 72nd and Broadway. It’s his family’s rent controlled apartment. He’s seen it all come and go. Real New Yorkers still exist up on the Upper West Side. They never went away.

It’s the openness of the people on the street and their frank reality and acceptance of New York Life that comes across most. Even though you can get killed very easily or robbed or mugged – The people in the video say if it happens it’s going to happen to them right there.

North of Columbus Circle from Riverside on the west to Central Park on the east, all the way up Broadway and Amsterdam Avenue to Morningside and Harlem across 110th Street, that’s the Upper West Side.

At the end of the day it’s the openness of the people on the street and their frank reality and acceptance of New York Life that comes across most. Even though you can get killed very easily or robbed or mugged. The people in the video say if it happens it’s going to happen to them right there.

Another question to the gang member crossing the street:

“Well I guess you would say I’m an outlaw.”

That’s New York. Honest and real with no sense of irony, guilt or embarrassment.

Every action has a reaction.

Sadly the privacy settings on the Vimeo channel won’t let us embed the thing but click here to watch.

Big thanks all the same to native New Yorker Mark Mannucci on Vimeo for producing this and uploading it. An amazing slice of NYC life and culture. Thanks also to one time NYC hustler DJ Dribbler for having his eyes peeled and discovering the short doc’ for us a few days back, for sharing with us and for penning the brilliant words to go along with it. Some man.

You should also have a read of Dribbler’s amazing anecdotes and accounts of a notorious graffiti writer and a notorious Glasgow DJ in New York City in the 1990s.